Can we dance for you?

“Can we do a dance for you?” asks Theresia, an elder in the small San community we are visiting. I say yes. The women start to chant and clap while the men and children dance around them. Theresia and her clan are Naro, a San tribe that occupies parts of the Omaheke Region. That afternoon my tour guide from Uakii Wilderness Survival had brought me to Zelda Guest Farm situated 92 km east of Gobabis. I am to spend the night on the farm in a traditional San homestead.

The dance continued.  Once again the men start to shuffle around the women to the sounds of clapping and chanting. Their dancing rattles shaking faster. The children imitate the men. The dance becomes more rhythmic. After a while the men are exhausted. “Our ancestors will be happy we do this, they will bless us,” Theresa adds. “We ask our ancestors to bless us whenever we go into the field. We also thank them for providing us food and good health.”

When we arrived at Zelda Guest Farm, we were greeted by Patrick; he manages the game reserve. He pointed us to our sleeping huts. The huts have welcome amenities – a double bed, flushing toilet, and hot shower. The water is heated by solar panels. 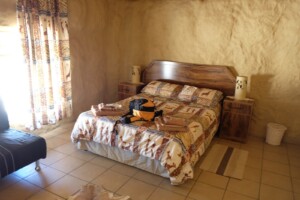 Before the dance the community had taken us on a field walk. Dressed in traditional attire of animal skins, the walk was led by the eldest male member of the community. The group demonstrated how they gathered food and hunted game. The San are a nomadic tribe, relocating frequently in search for food. The men travel even further distances tracking game. Their hunting techniques proved sophisticated. Once an animal is spotted, it is shot with a poisoned arrow. Only the experienced oldest male member is allowed to handle the poisoned arrows. The area where the animal is shot with the arrow is considered good meat. For years the San have lived in harmony with the environment, hunting and gathering without causing permanent damage.

Advances in civilisation have affected their way of life. Government regulations against game hunting have restricted their hunting practices. The assimilation of modern values has forced the San to reconsider their traditional lifestyle. However, it is evident that these people’s nomadic spirit is still strong. The men and younger generation have found jobs in nearby towns leaving the women and children behind. Theresia’s community has adapted to modernisation: using traditional knowledge the women gather ostrich egg shells and make beadery. Their beadwork is fascinating. 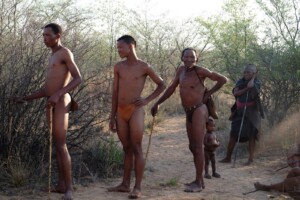 While waiting for our dinner to be prepared, my tour guide, Patrick and I converse under the stars. I learn with surprise how different yet familiar our life experiences feel. No matter how far removed we think we are, life has a way of bringing us together. I also learn that revealing your emotions is not a vulnerability. When traveling, one needs to trust others – that that they will be hospitable and welcome you with open arms and you in turn return the favour. In our fast-paced lives, we forget to share knowledge as well. “We forget to see the small things,” says Patrick. “We are only interested in the big five. The small animals also tell us something.” We sometimes forget to appreciate our surroundings and the small things in them. We forget to look up at the stars. So look up at the sky, you might just see a shooting star.

Tags: ExploreWhat to DoWhat to SeeWhere to Stay 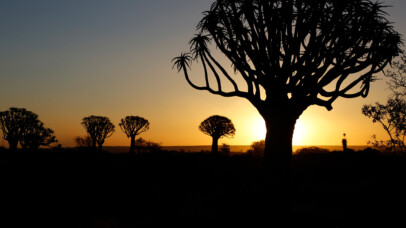 Why Namibia is a Great Safari Country 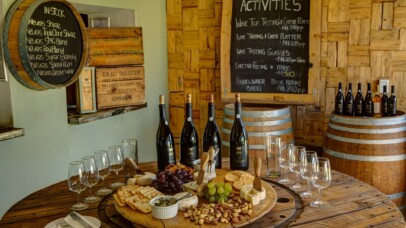 A Dillish Trip Through Namibia 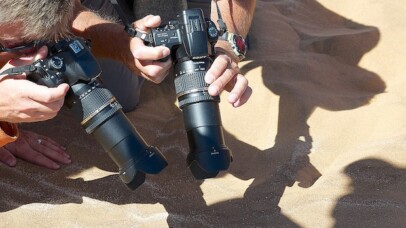 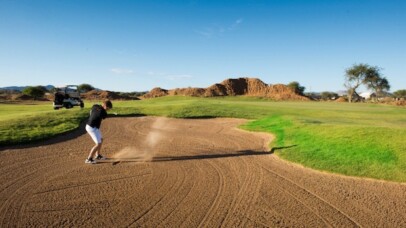 The Golf Courses of Namibia