Namibia has become a popular birding destination and has 687 confirmed species as of September 2021. Only one species is endemic to Namibia – the Dune Lark, usually found in the Namib Desert. 13 bird species are near-endemic and are easily found in Namibia and only marginally extend into Angola. 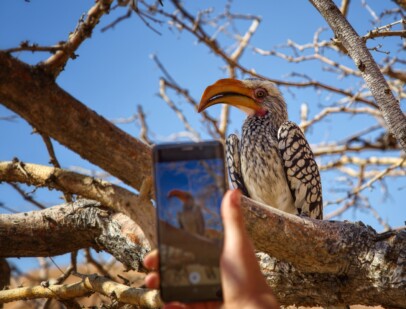 These include the Herero Chat, Carp’s Black Tit, White-tailed Shrike, Rockrunner, Rüppell’s Parrot, Hartlaub’s Francolin, Gray’s Lark, Violet Woodhoopoe, Korhaan and the Bare-cheeked Babbler. For the enthusiastic birder to Namibia, the wide variety of migratory and resident birds offers exciting birding opportunities. Some of the more popular birding locations include Etosha National Park, Waterberg Plateau, the Caprivi and northern river systems (more than 450 species recorded in this region), and the coast, with spots like Sandwich Harbour and Walvis Bay lagoon.

The Namib Desert offers excellent opportunities for sighting rare endemics like the Dune Lark. Most bird species favour specific habitats above others. Thus Namibia is blessed with various birding destinations where the keen twitcher can satisfy their interests by sighting and recording new species.

Birding is popular all over Namibia, even among locals, so international visitors can be assured that it is available across the country.

The best time for bird watching in Namibia is during the rainy season between November and April. Food is plentiful, and many migrant species can be seen along with the native species. Breeding typically occurs during this time, and many bird species exhibit their colourful breeding plumage. Some locations like Etosha National Park are much more viable for birding during the rainy season than game viewing. During the early months of summer, stable water sources are always a good choice for a serious day of birding.

In general, birding in Namibia offers many opportunities, from the smallest, Scaly Feathered Finch to the heaviest flying bird, the Kori Bustard. Namibia’s national bird is the African Fish Eagle.