A day with the Batswana people of Namibia

“You say dumela mmewhen greeting the women,” says Gertrude. Gertrude is my local tour guide. She will be showing me around her village called Metsweding. “To greet the men you say dumela ntate. Just say gosiameto say goodbye.Gosiamealso means okay. Later I’ll show you around the village. And in the evening you can meet the other villagers.” I am intrigued by her language and humbled by her hospitality. Setswana is a language I often hear spoken in South Africa. Hearing it spoken in this village reminds me of how little I know about the Batswana people of Namibia.

The Batswana People of Namibia 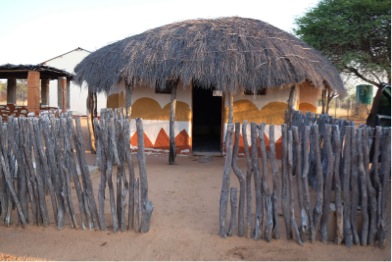 I am spending the night at Thaba Lodge. Gertrude and her women empowerment group, Boiteko, manage the lodge. The lodge has two traditional Batswana huts made of dung-and-clay huts. The place also has toilets and showers. For the adventurous, there is a campsite. When we arrived found school still in progress. “We have arranged for the school kids to come and dance for you,” says Gertrude. I thank her for their hospitality although highly embarrassed that I’m being treated like a high profile guest. 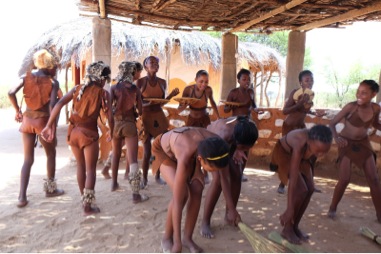 Welcoming song and dance from the school dance group.

The church plays a prominent role in the village. I learned with some surprise that affairs such as land allocation in the village are still controlled by the church. Other activities are also centred around the church. On the day we arrived, the school children were preparing for mass. In between preparation, the school dance group welcomed me. Clad in traditional skins, the group sang songs of welcome and praise mixed with dancing.

As promised Gertrude shows me around the village. Our tour commences with her greeting everyone along the way. “I used to teach kindergarten and Grade 2 at the primary school so I know all the local children and their parents,” says Gertrude. We proceed down a residential road and Gertrude points out the houses whose residents reside in the big city. With Metsweding so small it is no surprise Gertrude says dumelato her neighbours and quickly gets permission to show the visitor their homesteads.

A typical Batswana homestead is decorated with cow dung and red earth.

We stop at the local clinic where Gertrude takes me to the back and introduces me to the staff. The nurse remarks that this is not a clinic but a house, which understates the medical service they provide.

Our tour continues in the scorching heat. We stop at the popular mini-mart to rehydrate. The shopkeeper is old. “He comes from Botswana. His wife was Namibian. I don’t know where he’ll be buried,” says Gertrude. I reply surely where his wife is buried. Unconvinced by my answer, Gertrude continues, “I’ll show you the school.” At the school we find children playing, and waiting for mass. They are eager to have their picture taken. I am informed no afternoon classes were planned due to mass that evening. Right by the school is the church. The first church building stands beside the new church, its facade reminiscent of old Portuguese architecture but still distinctly German. Father Franz Watterott, who bought the Epukiro RC land and built the first church, is buried on these grounds. His grave is perfectly kept. It reminds me of how recent Namibian history is. At the beginning of the 20th century, the Batswana fleeing British rule encountered missionaries in the area. They asked the Roman Catholic Church for help. They needed a place they could practice their faith. The Roman Catholic church settled them on Epukiro RC.

Before I retire for the night, the villagers have gathered around the campfire and have started singing songs of praise and welcome. United in harmony their delight in singing is infectious. I pick up a few lines and sing along.