Why do Dunes have different colours and shapes?

In the Namib, dunes make up some 35% of the desert, including the main Namib Sand Sea south of the Kuiseb River; the sand dunes in the Skeleton Coast Park; and the dune field south of Tombua in Angola. In the Sahara Desert the proportion is as low as 10%. The rest of the area is made up of rocky desert, coarse-grained desert pavements, occasional river courses, alluvial fans, and ephemeral lakes or pans.

Despite the initial appearance of inhospitality in these environments, they host a wide variety of animal and plant species. The colourful, sinuous and constantly changing shapes of dunes make these accumulations of sand the more favoured desert destination for wildlife photographers and tourists. Many scientists like to study dunes, as they can be scrutinised at many different scales, from ground level to satellite views. Compilations of satellite images of natural features on planet Earth always contain many images of dunes and dune fields, as they show a wide variety of forms and colours, and are generally cloud free.

What is a dune actually?

A dune can be regarded simply as a hill of sand that is constantly changing shape and position.

Often, but not always, there will be a steep slope on the downwind side that is called a slip-face.

The angle of this slope can never be more than 30 degrees, although when you walk up a slip-face, it feels vertical! 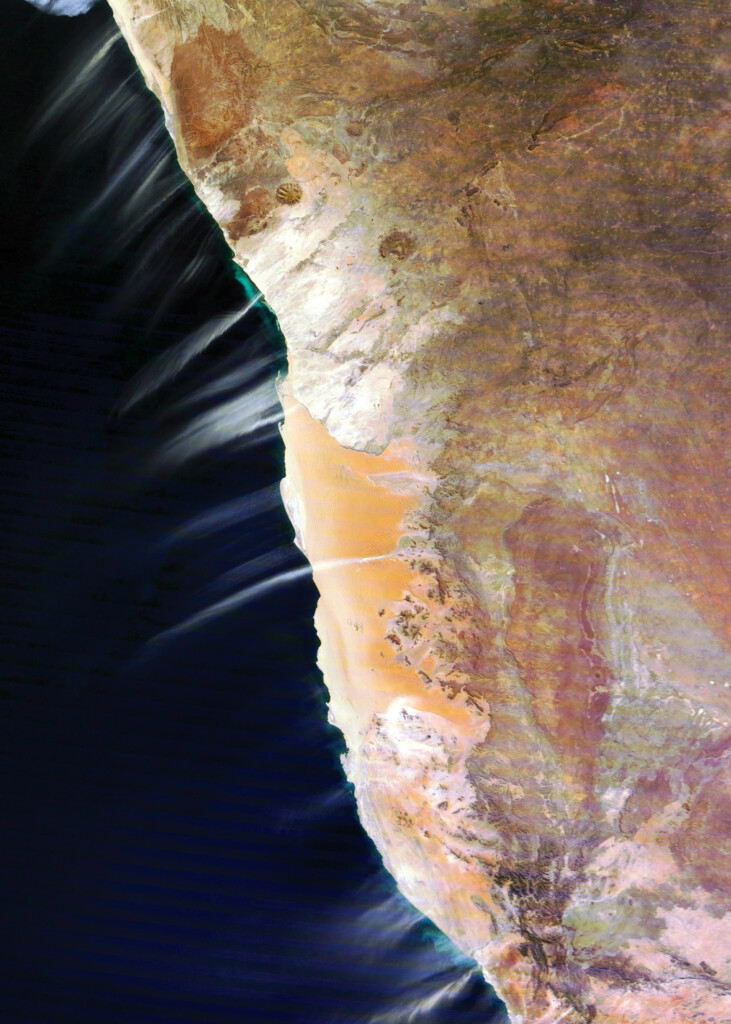 Dunes are found throughout our solar system – any planet that has an atmosphere and a barren, non-vegetated surface with loose grains can have windstorms that will transport sediment and form dunes. On Mars, where gravity is one-eighth of what it is on Earth and sand can easily be carried by the wind, some storms can cover almost the entire planet and last for several weeks or months. On Earth dunes most commonly form in hot, dry areas where potential evaporation (that is the evaporation that would have taken place if there were enough rain) exceeds rainfall. Some dunes can form on coasts or in colder climates.

The amount of material that is blown by wind depends on the strength of the wind, the size of the particles and the nature of the surface area over which the wind blows. Stronger winds can obviously move more and coarser material than a moderate wind, but even moderate winds can blow fine dust particles along. In Namib the sand sea is largely free of dust, as this has all been blown through the system and beyond by strong winds, leaving behind the coarser material. The high-intensity east winds in winter regularly blow dust out to sea for many hundreds of kilometres. African dust has been recorded as far away as in the Caribbean region on the other side of the Atlantic.

The colours of dunes can vary considerably. In the White Sands area of New Mexico in the USA, the dunes are stark white, as they are made of gypsum (plaster of Paris) grains. In the main Namib Sand Sea, the dune colour varies from pale yellowish near the coast to reddish pink in the far interior. Several theories have been put forward to explain this variation. The main cause is probably that the weathering of iron-bearing material such as rock fragments causes iron-oxide coatings – rust in other words – to form on the surface of grains.

Near the coast where the sand has recently emerged from the sea, the weathering process has not had sufficient time to form the iron oxide and coat the grains. The winds at the coast are also of higher strength and regularity and may roughen the coatings as they form. Further inland the winds are not as strong and the dunes are more stable, allowing the coatings to form. Occasional rain could aid this process, as well as chemical and biological weathering caused by the sparse vegetation cover.

When you stand among the dunes it is impossible to gain a complete picture of their form and shape. However, from the air, you can fully appreciate the complexity and form of the dunes. Aerial photographs and satellite images reveal the true beauty and variety of dune types.

Star dunes are often the highest dunes in an area, as they grow vertically rather than migrating laterally

The shapes of the dunes are determined by the supply of sand and whether the winds are uni- or multidirectional. There are many names for different dune types, but in essence, they are all a continuum of a few basic types or a combination of these types.

In a strong unidirectional wind regime where the sand supply is low, barchan dunes will form. These have a crescent shape and can move rapidly across the surface. In the northern Skeleton Coast Park, some barchans have been recorded as moving over 40 metres a year. As the amount of sand available becomes greater, these dunes start coalescing into transverse dunes, low ridges oriented at 90 degrees to the wind direction. Barchans and transverse dunes are common near the coast where strong winds are prevalent. They are, however, not limited to this zone.

In areas where bidirectional winds are common, we find linear dunes (also known as seif dunes). Multidirectional winds and an abundant sand supply result in star dunes being formed. These are often the highest dunes in an area, as they grow vertically rather than migrate laterally. Other dune types are hummock dunes, which form around obstacles such as low bushes. These are common near the coast and in rivers.

Combinations of the above can also be found, for example, small barchans on large barchans. These are called compound dunes. Complex dunes are ones where different dune forms are mixed, such as star dunes superimposed on a linear dune. All the major dune types are found in Namib. Located at the interface between the Namib Sand Sea and rocky plains and along an ephemeral river course, the Desert Research and Training Centre at Gobabeb is perfectly placed for doing research on dunes and the ecosystems associated with them.