One of the greatest game parks in Africa – and one of the oldest – is also Namibia’s number-one tourist destination. Home to

114 large and small mammal species, more than 400 recorded bird species, scores of reptiles and even a fish species, Etosha is the country’s flagship park. The size of the park has been reduced considerably since it was first proclaimed in 1907, but it still remains larger than several European countries.

The Ondonga name for the pan was Etotha, meaning ‘the place where no plants grow’, but early European traders, unable to pronounce the name, called it ‘Etosha’. The pan was once part of the massive Lake Kunene fed by the Kunene River, which at some time in the distant past dried up, leaving the current pan system. Newly excavated fossils belonging to marsh-dwelling antelopes such as sitatunga, lechwe and tsessebe, and a 90- cm long catfish, are testament to much wetter periods.

Etosha has a proud record of black-rhino conservation, and white rhino were recently re-introduced. The park has also played a major role in the recovery of the endemic black- faced impala. The Etosha Ecological Research Institute attracts scientists from around the world.

Etosha’s waterholes are famous among international tourists for spectacular game viewing and at the Okaukuejo waterhole at night it is possible to see black rhino, lion and elephant. 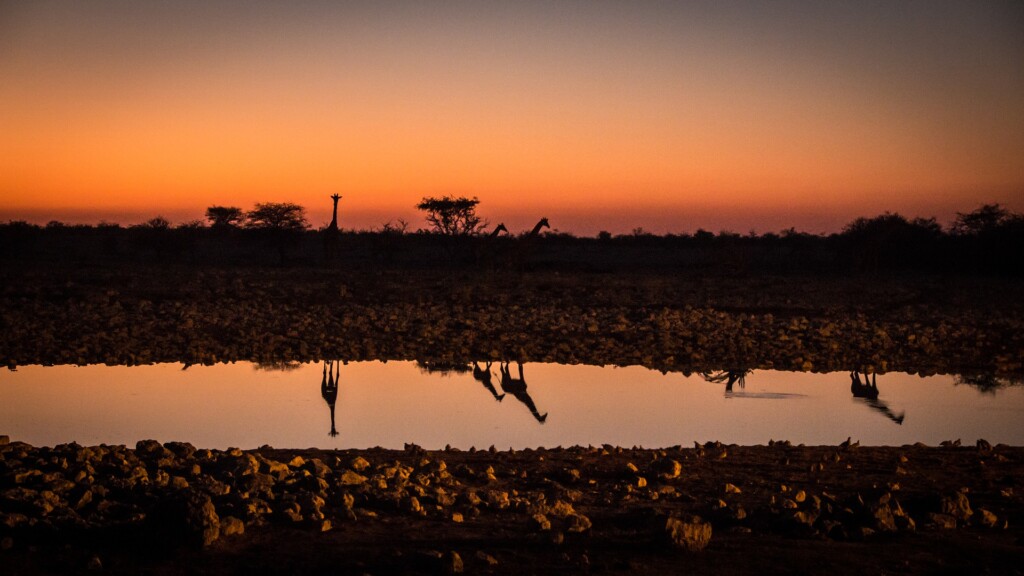 Natural features: The park is dominated by an expansive saltpan and several smaller pans. Scenic waterholes have abundant game. The veld is flat and open, with the only hills around
Halali Rest Camp and in the extreme west of the park.

Key management issues: Water provision is probably the most important activity in the park. Apart from the few natural springs, most waterholes are artificial and need maintenance. Boreholes are either powered by wind or solar energy. The biggest challenge is usually during spring when gaming concentration at waterholes is high and it is cloudy, reducing the effectiveness of solar panels. Diesel engines are used to supplement windmills or solar pumps during windless and cloudy days respectively.

At present, poaching levels are low due to community involvement in the Community-based Natural Resource Management Programme. Anti-poaching patrols are conducted by the Wildlife Protection Services by vehicle, on foot and via aerial patrols. Tourist patrols are also conducted, with speeding and not obeying other park regulations problematic.

Fencing teams are constantly challenged to keep up with maintenance and repair new breaks in the over 800-km perimeter fence.

Maintenance of the gravel roads and firebreaks is carried out by the maintenance team within MET. Firebreaks are graded once a year after the rainy season.

Despite the fencing, animals such as lions, hyaenas and elephants leave the park and cause problems on neighbouring farms and communal areas. Staff spend a lot of time trying to resolve human-wildlife conflicts and holding problem-animal forums with neighbours to share ideas on minimising these conflicts.

Interactive information centres at Halali, Namutoni and Okaukuejo with specific themes will be developed further. These will include interpretive displays, touch screens, auditoriums and other tourist information. The centre at Namutoni will incorporate a museum. Namibia Wildlife Resorts will develop a fifth camp in western Etosha.

Establishments in this Park:

Tented Lodges
Tags: What to DoWhat to SeeWhere to Stay