Africa’s largest natural gorge, some of the world’s oldest rock paintings, one of the richest botanical hot spots on earth and Namibia’s most popular hiking trail it’s all at;/Ai- /Ais Hot Springs.

Proclaimed in 1968, the rugged and relatively unexplored Huns Mountains were added in 1988, vastly extending the boundary of the park. The park borders directly on the Richtersveld National Park in South Africa. A treaty was signed in August 2003 between Namibia and South Africa, creating the /Ai-/Ais-Richtersveld Transfrontier Park (ARTFP).

/Ai-/Ais means burning water in the local Nama language and refers to the sulphurous hot- water springs found in the park along the Fish River. The park is dominated by the Fish River Canyon – the second largest in the world – that took over 600 million years to evolve. It also contains some hidden treasures such as the little-known Apollo 11 Cave, containing animal images more than 25 000 years old. 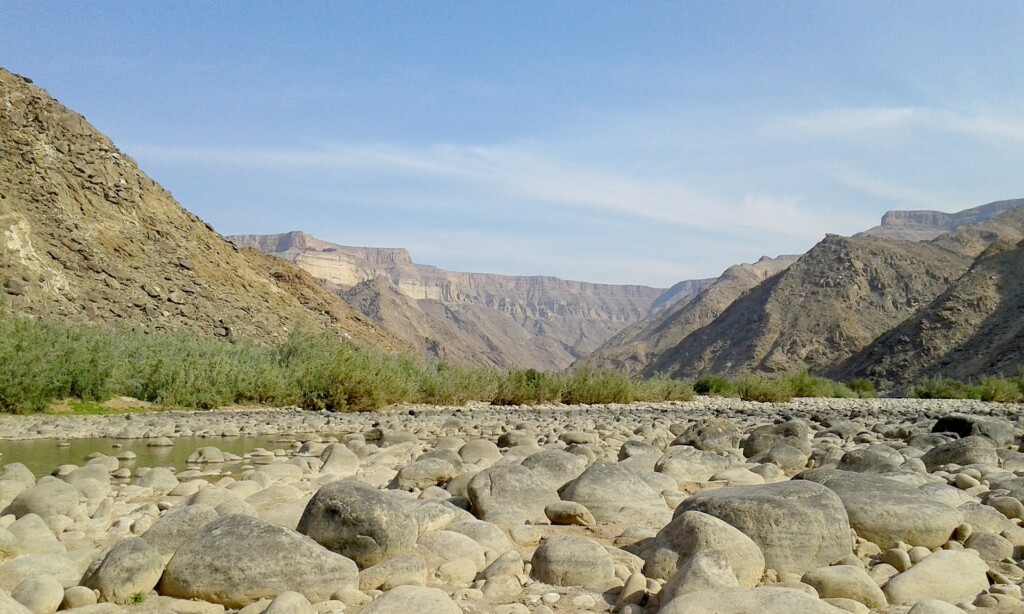 Natural features: Mountainous terrain in the west all the way to the Orange River, which forms the southern boundary between Namibia and South Africa, and /Ai-/Ais and Richtersveld national parks. The Fish River Canyon dominates the eastern section of the park.

Key management issues: Mining is the largest challenge to biodiversity in the park, with several areas along the river under Exclusive Prospecting Licences (EPLs). The Ministry of Environment and Tourism is working toward strategies to enforce regulations for the rehabilitation and reclamation of mining areas.

Invasive alien species, particularly Prosopis glandulosa and wild tobacco (Nicotiana glauca), are another challenge. The MET is working with partners to develop plans to control the species.

Other problems include illegal livestock grazing, fishing and park entry.

Future plans: A feasibility study for the development of the Apollo 11 Cave as a tourist attraction is being undertaken. The main viewpoint at the Fish River Canyon is receiving a facelift, with more shade, seating, picnic areas and an information display expected to be completed in mid-2010.

New park gates will soon be opened. The park is set to be part of the larger !Gariep Transfrontier Conservation Area between Namibia and South Africa is aimed at conserving biodiversity in protected areas and on private land.

Establishments in this Park: